The concept of a riverfront connection to Pittsburgh's Convention Center was introduced in 1996 when the Convention Facilities Needs Assessment Task Force presented its recommendations for expansion of the old Center.

With the completion of the Convention Center Riverfront Plaza in 2011 (click here for press release), a continuous pedestrian and bicycle riverfront trail is now in place from Point State Park to the Strip District, completing a missing link in the Three Rivers Heritage Trail. Additionally, the pedestrian path through the Convention Center's 10th Street water feature no longer dead-ends at the river, but now becomes an additional pedestrian connection to the City’s trail system.

The SEA completed the project with assistance from federal, state and philanthropic sources which include: 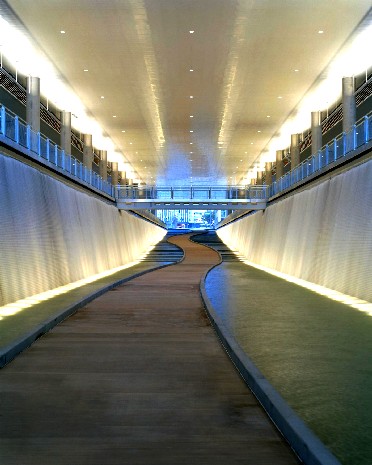 In order to invite people in the Penn Avenue corridor to the waterfront, the Tenth Street Water Feature was constructed as part of the pedestrian walkway beneath the Convention Center. The walkway descends seventeen feet from the street to the river as it meanders through fountain pools. The walls surrounding the path flow with water, and overhead lighting creates an environment that feels safe and welcoming. The passageway to the river was designed by Rafael Vinoly Architects as part of the Convention Center; the water feature was designed by Crystal Fountains.

The Tenth Street Water Feature was built with private financial support from the Heinz Endowments, the Grable Foundation, the Hillman Foundation and the Laurel Foundation. Public assistance came from the Commonwealth of Pennsylvania and the Federal Highway Administration.