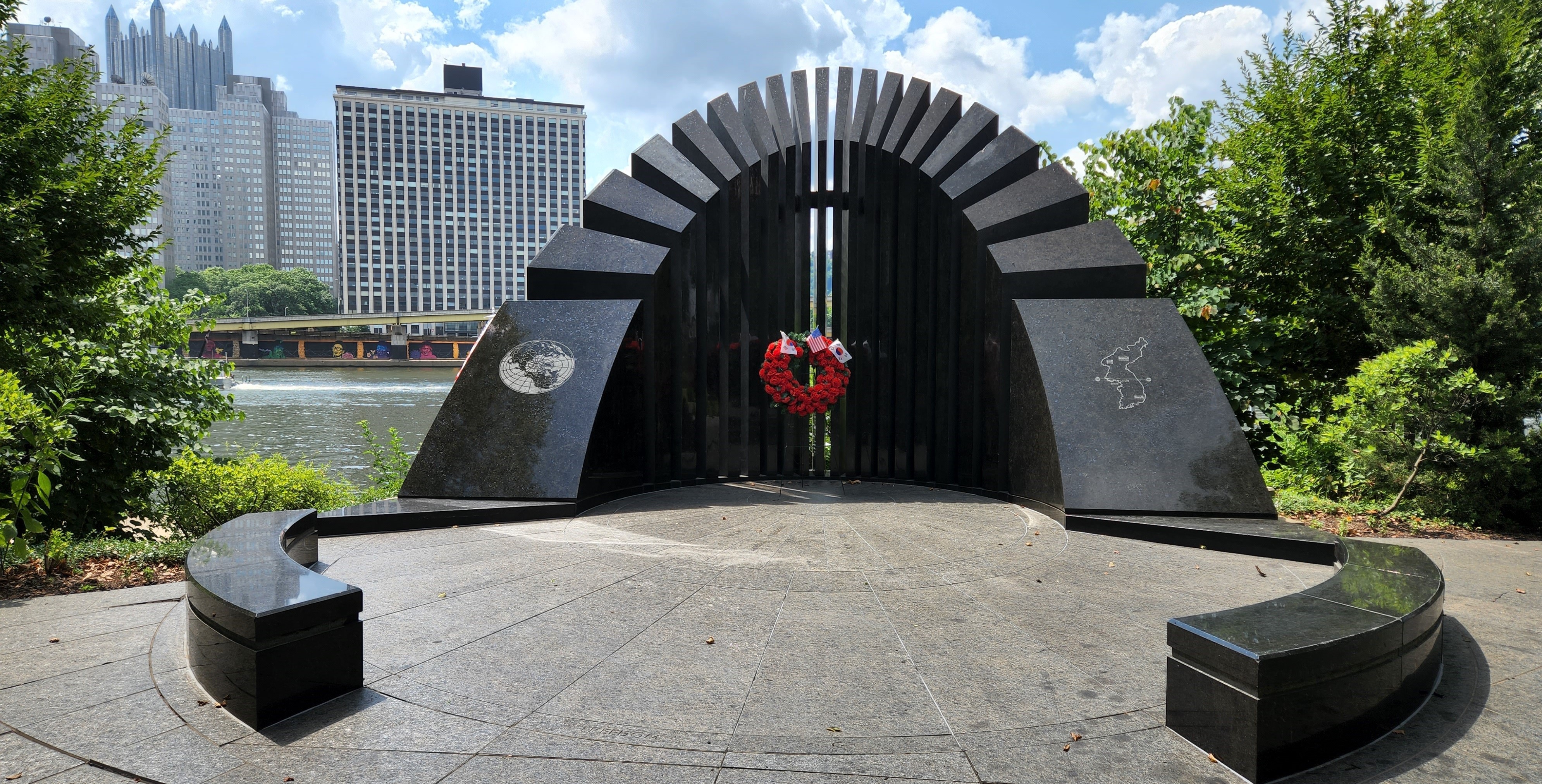 Mr. Fischer was selected by a committee of local art experts to design and install site-specific artwork. The Heinz Endowments and the Pittsburgh Foundation funded the program and installation was completed in August 2007. 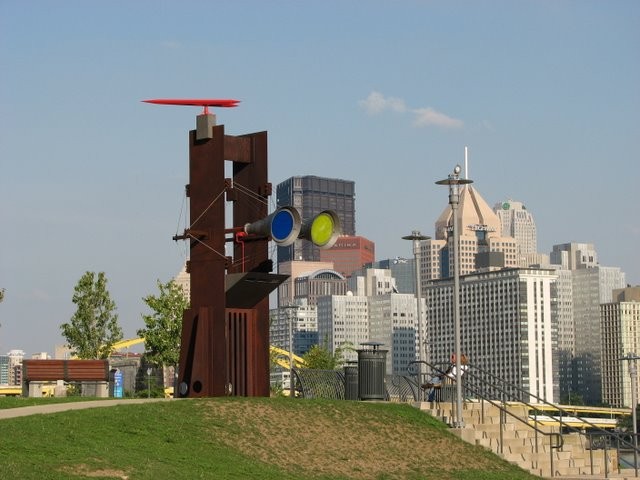 Features
Langley Observatory Clock is the result of a public art program established by the SEA at the onset of the North Shore Riverfront Park project. The program sought to use public art as a means of reintroducing people to the rivers, promoting cultural activities and enriching the City's public art collection.

The SEA's Board of Directors appointed an eleven-member committee comprised of local art experts to oversee the program, develop selection criteria and award commissions. A Request for Qualifications was issued and nearly 30 responses were received. From the six artists that were invited to submit proposals, the committee selected R.M. Fischer to create a site-specific installation for the park.

Langley Observatory Clock stands over 21 feet tall and is made primarily of Corten steel and stainless steel. Attached to its main body are two stainless steel lanterns that extend outward. The telescoping “eyes” of the lanterns, held in tension by stainless steel cables, have illuminated blue and amber lenses like railroad switch lamps of yesterday. Below the lanterns a large triangular stainless steel trough theatrically illuminates the interior of the portal at night. At its zenith, a red aluminum clock hand circles horizontally, marking the passing minutes. The forked form of the minute hand, inspired by the confluence of the three rivers, is a streamlined vector connoting the march of time.

The title of the sculpture, Langley Observatory Clock, refers to the work of Samuel P. Langley. In 1870, Langley, Director of the Allegheny Observatory, created the Allegheny System - a standardized system of measuring and disseminating the accurate time. Langley used the observatory telescope and astronomical observations to set the time on a specifically designed clock. Using telegraph wires, Langley connected the observatory clock to a highly visible clock located at Pittsburgh's City Hall on Smithfield Street. By the end of the year, 42 railroads were provided a standard time through this system.

In his artist statement, Mr. Fischer writes that his sculpture, "celebrates the act of looking out over the river. The work is a response to the industrial history of Pittsburgh while simultaneously appearing timeless and looking forward.” 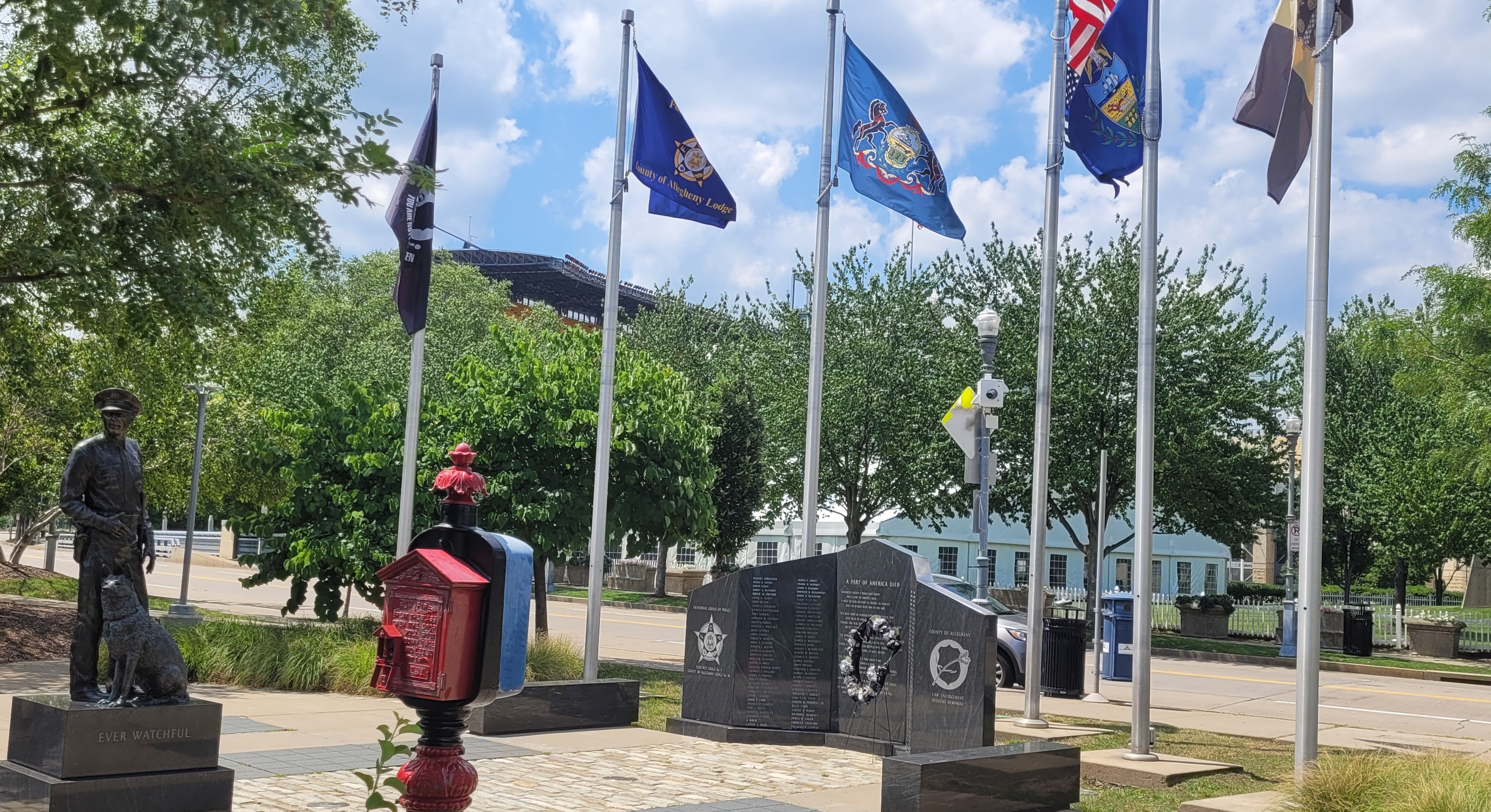 The Law Enforcement Officers Memorial, Inc. is a nonprofit organization consisting of police officers, survivors and private citizens who worked to build and maintain the Law Enforcement Officers Memorial (LEOM). The original LEOM was dedicated August 25, 1996, and was located near Three Rivers Stadium. Further to the redevelopment of the North Shore, the SEA worked with the LEOM for the modifications needed to be reinstalled in the Park. It is now situated in the Great Lawn area next to Tribute To Children at North Shore Drive and Art Rooney Avenue. The Memorial was re-dedicated on Saturday, May 17, 2003. The Memorial is owned by the LEOM organization with ongoing maintenance provided by LEOM, Inc.

Features
The City of Pittsburgh and Allegheny County, working with local Veterans organizations, formed the WWII Veterans of Allegheny County Memorial Fund. In 2001, the Fund hosted a national design competition from which Larry Kirkland of Washington DC, and Design Workshop of Denver, CO, were selected for the project. After reviewing several sites throughout the region, a portion of the Great Lawn at the North Shore Riverfront Park was selected in cooperation with the SEA. The design was approved by the SEA, Riverlife, and the City's Art Commission. Funding sources for the Memorial included State, philanthropic, corporate and individual for the design, construction and maintenance of the Memorial. The SEA accepted ownership of the Memorial on July 31, 2015 and is responsible for ongoing maintenance.

The Memorial includes 52 panels of glass and granite that describe the war, the region's role in the conflict, and the sacrifices of local veterans. Visitors pass by a large pole-mounted flag and then enter the heart of the memorial, an elliptically-shaped space defined by the 52 panels. The panels contain images from both the Pacific and European campaigns. Granite plaques tell the narrative story of the war. The interior is devoted to the local history while the exterior describes the story of the war around the world.

The SEA acknowledges the generous contribution of the International Brotherhood of Electrical Workers (IBEW) - Local 5 to help defray costs related to the POW-MIA and United States flags flying at the Southwestern Pennsylvania World War II Memorial.

Features
Colcom Foundation states that Tribute to Children was the vision of the late Cordelia May, who was a longtime friend of Fred and Joanne Rogers. Upon Mr. Rogers’ passing, Ms. May wished to honor Fred at a location where his legacy could be remembered. The intent of Tribute to Children was to create an easily accessible, highly visible, new destination that would attract families and visitors to Pittsburgh and serve as a source of pride to its residents. The Memorial’s features include:
Home    |    Privacy Policy    |    Contact Us
© Pittsburgh SEA - 2019