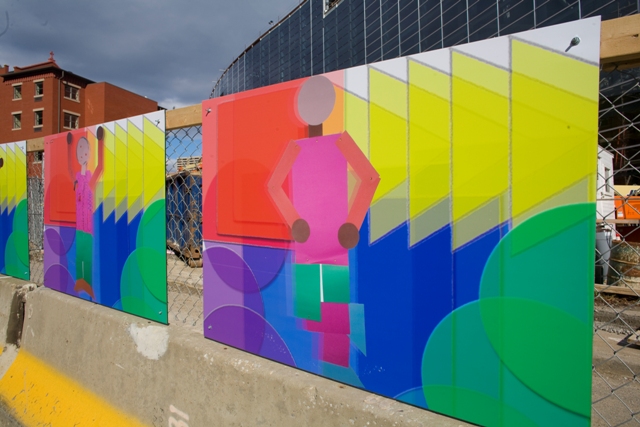 PPG Paints Arena is the home to the Pittsburgh Penguins hockey team and other sports, entertainment, and cultural events. It follows PNC Park, Heinz Field, and the David L. Lawrence Convention Center in reshaping the landscape of the city. Each of these civic facilities incorporated significant public artworks that have become anchors of Pittsburgh 's contemporary public art collection.

The New Arena Public Art Master Plan was completed by Todd W. Bressi, Jill Anholt, and Bethea-Brown Associates and adopted by the SEA Board in January 2009. Commissioned by the SEA, the Urban Redevelopment Authority, and the Pittsburgh Penguins, it serves as the guiding document for commissioning outdoor public artworks at the PPG Paints Arena site. It was developed through consultation with the arena's internal stakeholder group, representatives and members of the Hill District and Uptown communities, and representatives of arts, cultural, and philanthropic organizations in the city.

Construction as Canvas: Temporary artworks that are incorporated into the construction fences and developed by an artist, community organization, and youth collaboration. This project was completed in October 2009 and was at the site until fall 2010.

Garden Passage: A public space that connects the southwest and northwest entry plazas and explores issues of terrain, environment, and infrastructure. Walter Hood is the artist for this project.

Activation: A digital or interactive artwork, for the arena's northeast plaza , that engages viewers directly and embraces the kinetic energy of athleticism and sport. This project will not be initiated until funding is secured.

Leslie Ansley worked with young people ages 10 to 18 in a program organized by Bedford Hill Apartments. Ms. Ansley and her workshop participants designed a 600-foot photographic, fabric mural installed along the Centre Avenue construction fence. Her workshop focused on the history of the Hill District, with an emphasis on the work of playwright August Wilson and photographer Charles “Teenie” Harris. Ms. Ansley's students worked in photography, writing, role play, and costuming to develop the imagery for the fence. Remembering Our Future included photographs of costumed participants and community members, text from their writing workshops, and an abstracted map of the Hill's street grid.
Building a Greener Hill
Ashley Hodder

Ashley Hodder worked with young people ages 11 to 15 in a program organized by Schenley Heights Community Development Program. They designed a 580-foot “green fence” for the Fifth Avenue perimeter of the arena. Their project was inspired by Pittsburgh 's leadership in green building and design, including the Gold LEED ® certification of PPG Paints Arena. Ms. Hodder and her participants visited Phipps Conservatory, learned about green design, and toured public art in Pittsburgh as part of the inspiration for their fence. To create Building a Greener Hill, the artist and the participants designed a temporary artwork that was actually a living and growing fence – planting sections of the fence with sedum plants and reconfiguring construction cones into planters. These living sections were complemented by small sculptures of animals and plants created from recycled construction materials.
Changing Shape
Gregory Anderson

Gregory Anderson worked with children ages 6 to 8 in a program organized by the Centre Avenue YMCA. Mr. Anderson created and led a four week workshop to build student knowledge in the visual arts, including two and three dimensional shapes, basic anatomy, color theory, figure drawing, and cartooning. They developed Changing Shape, a series of 24 panels along the Washington Place construction fence. Each colorful panel contained a character created by the children during the workshop. 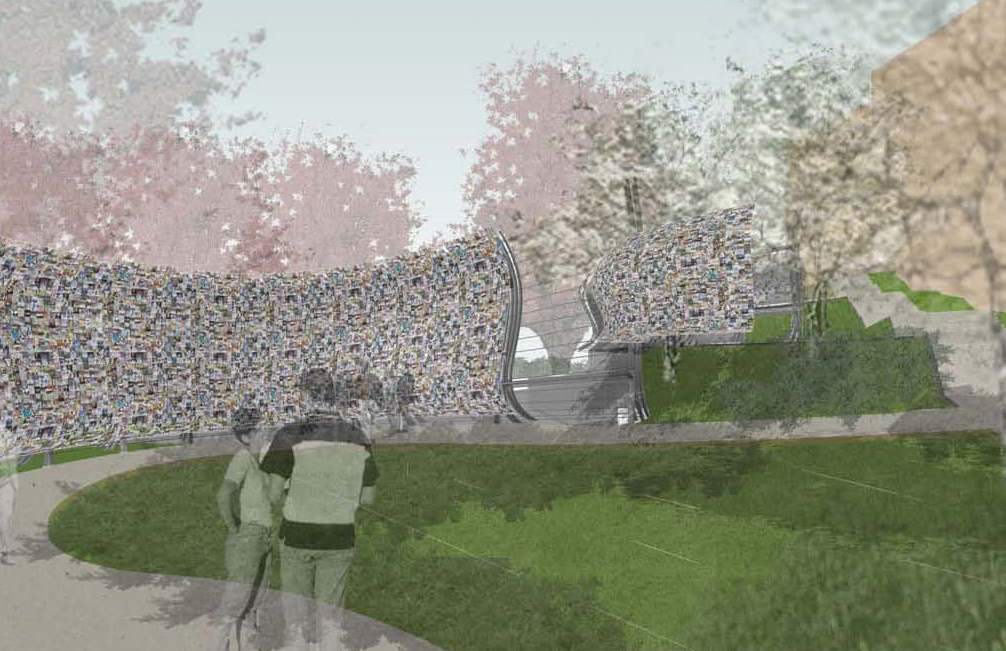 Garden Passage is the proposed pedestrian connection linking the southwest and northwest plazas of PPG Paints Arena. The total cost for the project is estimated at $2.47 million. Per the recommendations of the New Arena Public Art Master Plan, the design team selection process was completed in two-stages, with a Design Team Selection Committee first recommending three finalists and later a team to be awarded the commission.

A request for qualifications (RFQ) was distributed to artists and design firms around the world and was also advertised in local newspapers and regional artist emailing lists. After reviewing proposals and interviewing each of the teams, the selection committee recommended the selection of Hood Design (Oakland, CA). Walter Hood, principal of Hood Design, is both an artist and a landscape architect. The project, entitled Curtain Call, involves a series of rain gardens surrounded by vertical frames that will display thousands of images collected through a process of engaging the local community. The project is proceeding with Walter Hood (designer of Curtain Call), Pittsburgh Penguins & its development partners, and the SEA, to further evaluate the feasibility of an alternate location in the adjacent Lower Hill Redevelopment Site. Based on the outcomes, a community presentation will be made. 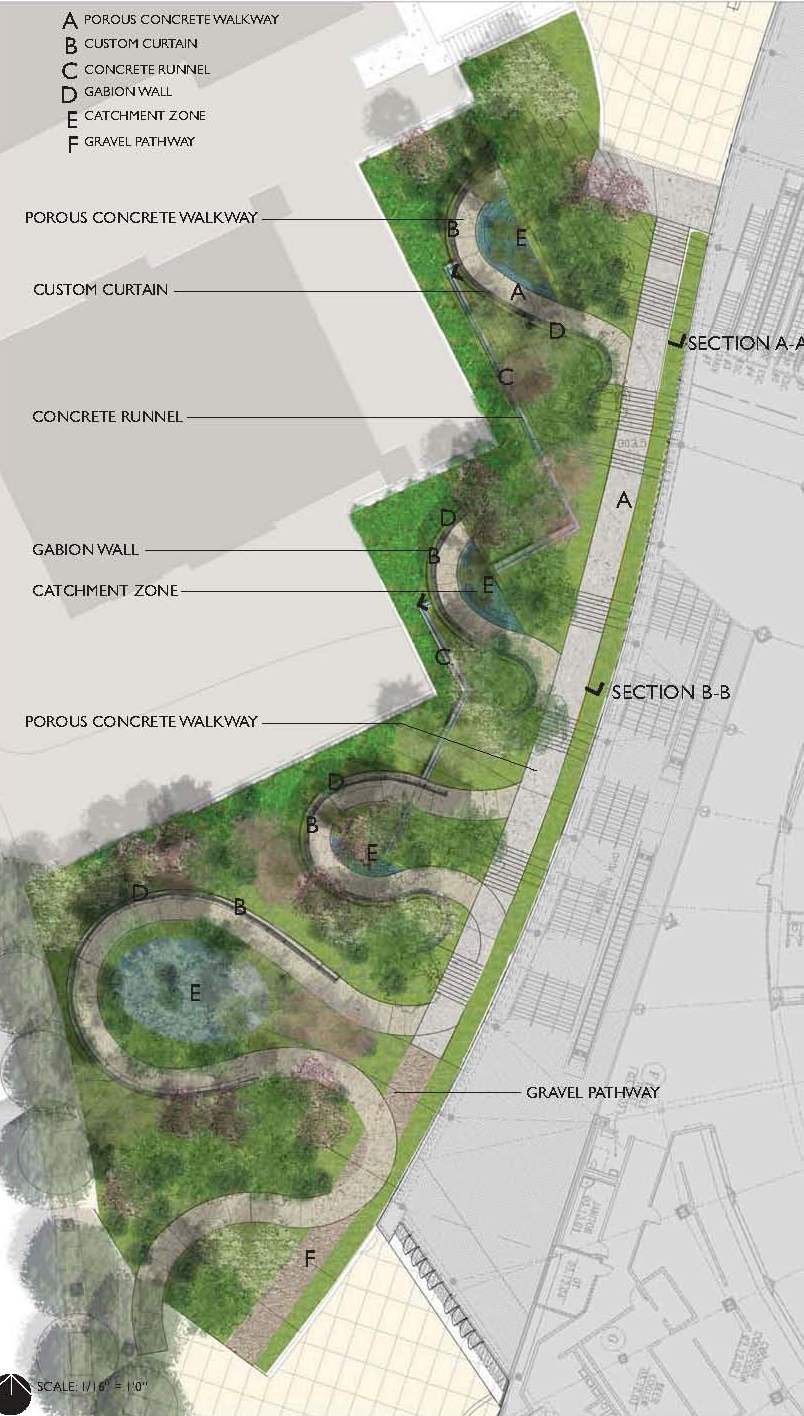