The Hill District is one of Pittsburgh's oldest residential neighborhoods and one of the Country's culturally significant African-American neighborhoods, due in large part to its contributions in music (jazz in particular), literature and sports. As part of the City of Pittsburgh's urban renewal efforts of the late 1950s, the historic Lower Hill was declared blighted and 95 acres of the Hill District neighborhood were cleared, including 1,300 buildings, 413 businesses and 1,600 families (over 8,000 people). A new Cultural Center was planned which was to include an opera house, playhouse, art gallery, upscale hotel and apartment buildings. By 1966 the area contained only a new public auditorium (that became known as the Civic Arena), an apartment building and an apartment/ hotel complex. Significant portions of the land were never developed and remained surface parking.

In September 2007, as part of the Lease negotiations for PPG Paints Arena, the URA and SEA entered into a short-form Option Agreement pursuant to which the Penguins have development rights to the 28 acres in the Lower Hill that were formerly the site of the Civic Arena. The short-form Option Agreement was replaced with a Comprehensive Option Agreement in September 2014. That agreement was then replaced by an Amended and Restated Comprehensive Option Agreement dated June 20, 2018. The term of the Option Agreement expires on October 22, 2025. The Penguins have undertaken a master planning process for the development of a new high quality, sustainable development with open spaces and residential, commercial, office, and hotel uses on the site. In addition, a Community Collaboration Implementation Plan for the continued redevelopment of the Greater Hill District was entered into among the Penguins, Hill District Community and the Lower Hill Working Group, with support from the City and Allegheny County.

The Penguins have chosen Buccini Pollin Group as the lead commercial developer for the eastern-most portion of the site.

The Preliminary Land Development Plan (PLDP) and Specially Planned Zoning District text, as well as accompanying subdivision plan for the work related to infrastructure, was approved by City Planning in December 2014 and February 2015 respectively. The PLDP is the basis for the creation of a Specially Planned Zoning District for the development site. The PLDP document identifies guidelines for plans, street types, building types, signage, lighting and street furniture, open space and landscape standards, systems and network integration (utilities), sustainability goals and objectives, and off-site improvements. 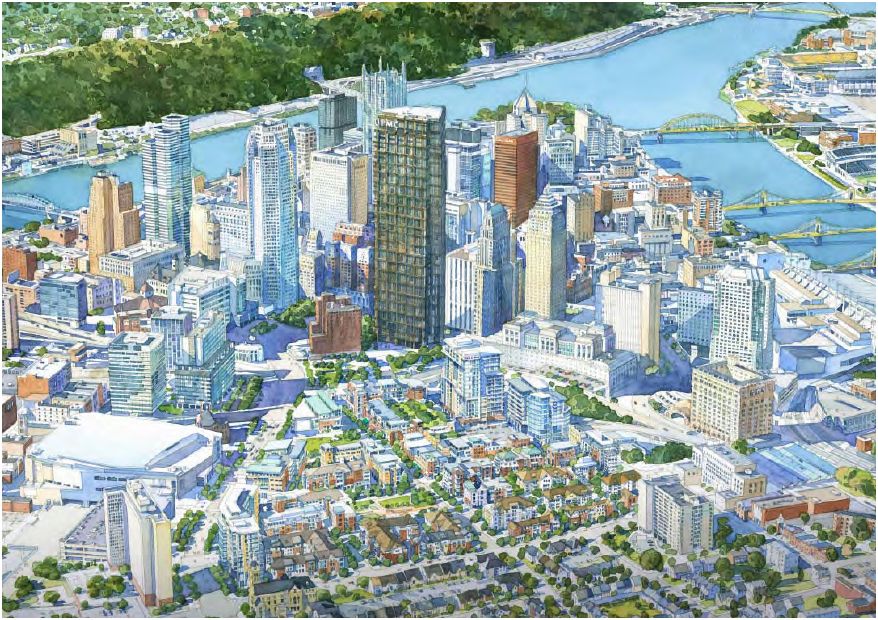 The PLDP incorporates expectations of innovative sustainability initiatives. It is intended that the development will earn a certification in the LEED for Neighborhood Development (ND) rating system. The sustainability initiatives for the total project were guided by a “Sustainability Stakeholder Group” that included experts in the following fields: Energy (exploring alternative energy and energy-efficient concepts, such as central energy or thermal co-generation facility); Water Management (focusing on integration of sustainable stormwater management techniques to reduce rainwater runoff); Transportation (implementing best practices for vehicular and pedestrian traffic flow); and Materials (identifying sustainable materials for use in the construction of infrastructure and buildings).