The David L. Lawrence Convention Center is an exceptional facility which draws many visitors from around the country. Architect Rafael Vinoly designed the building to be tailored to the City of Pittsburgh, with features that balance both aesthetic quality and operational efficiency.

The Convention Center graces the City skyline with a design inspired by the great bridges of Pittsburgh. It was the first convention center in the United States built with a strong commitment to environmental principles such as natural lighting and ventilation, water reclamation, and recycling.

In November 2003, the Convention Center received a Gold LEED for New Construction Certification from the U.S. Green Building Council (USGBC). At the time, it was the largest green building in the world. In May 2012, the Convention Center received a Platinum certification under the LEED for Existing Buildings: Operations & Maintenance rating system. It is the first convention center to achieve this ranking, and is also the first to earn certifications under two separate LEED rating systems.

Philanthropic Involvement
Pittsburgh's philanthropic community played a major role in the Convention Center's development. The following foundations supported the design element of the building by funding a $750,000 design competition.

In February of 1999, Rafael Vinoly Architects was selected by the Southwestern Pennsylvania Convention Center Design Commission. Construction of the building began in February of 2000.

To ensure the environmental integrity of the building, the Heinz Endowments provided a $4 million grant to the Green Building Alliance and another $3 million loan to the SEA for the cost of green technologies which helped the Convention Center earn the Gold LEED Certification.

Dollar Bank
Dollar Bank was the first corporation to provide a major sponsorship to the Convention Center. Founded in 1855 and headquartered in Pittsburgh, this financial institution is a federally chartered mutual savings bank with offices throughout Southwest Pennsylvania and Northeast Ohio.

In 2003, the SEA entered into a twenty-year agreement with Dollar Bank for the naming rights to the Convention Center's Grand Ballroom, which is the largest ballroom in the City of Pittsburgh. With almost 32,000 square feet of space, the Grand Ballroom is capable of seating over 2,500 people banquet style. After holding a regional naming competition, Dollar Bank named this new ballroom "The Spirit of Pittsburgh Ballroom."

In addition to the financial institution's monetary contribution, Dollar Bank, through the work of Dymun + Company, Pittsburgh Filmmakers, RPC Video, Inc., PMI, and The Sextant Group developed and installed a "Regional Showcase" using a high definition, multi-media format. This showcase presents the region's history and culture as well as its people, resources and amenities. Installations are located in four sections of the building:


Noresco
In the twenty-year term of the sponsorship agreement, which began in 2003, the riverfront terrace became known as Noresco Riverside Terrace. The terrace runs the entire 600-foot length of the third floor and faces the Allegheny River. This area is a popular site for event programming and receptions.

Additional Sponsorship Information
If you or your company are interested in learning more about the David L. Lawrence Convention Center sponsorship campaign, please contact the SEA at (412) 393-0200.

For more information please visit the website for Levy Restaurants.

Veolia also operates the Wastewater Treatment Plant, which collects and treats all wastewater from sanitary potable uses. The water is then recycled throughout the building for toilet flushing.

Art Committee
During the construction of the Convention Center, the SEA established an art committee to guide the process for commissioning and acquiring artworks. The committee was responsible for developing the plans, issuing calls for artists/artworks, reviewing proposals, and selecting the artists/artworks.

In 2012, a new art committee was established to advise the SEA on items related to the existing public art collection. The committee is responsible for reviewing and making recommendations to the SEA Board regarding gifted artworks, maintenance of existing artworks, and commissioning or acquiring new artworks.

Pittsburgh's Convention Center is the first environmentally friendly building of its kind. In November 2003, the facility received a Gold Certification under the LEED™ for New Construction rating system from the U.S. Green Building Council (USBGC) and became the largest green building in the United States.

In May 2012, the Convention Center received a Platinum® certification under the LEED rating system for Existing Buildings: Operations & Maintenance™ and re-certified as Platinum® in 2017. It is the first convention center to achieve this ranking, and is also the first to earn certifications under two separate LEED™ rating systems.

Pittsburgh routinely finds itself rated amongst the “greenest” cities in the nation. In 2015 Pittsburgh was 12th among metro areas in per capita LEED™ buildings (square feet/person), with more square feet added every year. When the Convention Center was first built, Pittsburgh had four LEED™ projects totaling over 2.4 million square feet. The Convention Center comprised nearly 60% of the city's total green buildings at the time. As of 2017, there are over 150 commercial and residential LEED™ certified projects in Pittsburgh.

No other convention center in the country incorporates so many green technologies. The Convention Center's unique building features include:

As of 2015, the Convention Center keeps more than 60.3% of its event waste out of landfills through recycling, composting, and donating usable materials. It also uses 28% less energy than the average entertainment sector building, and 30% of electricity comes from renewable sources.

In relation to water usage, only 17% of the Convention Center’s water use comes from municipal sources. In 2015, the amount of recycled water that went through its wastewater treatment plant could fill over 7 Olympic-size swimming pools.

Green Report
The SEA prepares an annual Green Report detailing the sustainable features and operation of the building, which can be found here.

Case Study
In November 2011, the Convention Center completed a two-year case study process that provided financial justification for building performance, facility management, occupant satisfaction, and organizational sustainability. The study was the first of its kind and had three goals:


A thorough set of analyses contributed to the findings, including quantitative and qualitative assessments on systems including: energy, natural ventilation, water, site, transportation, waste, purchasing, commissioning, and occupant comfort. The research team also went beyond typical post- occupancy metrics to examine corporate culture, organization learning, stakeholder perceptions and marketing initiatives related to sustainability. The project was coordinated by the Green Building Alliance and funded by the Heinz Endowments, with support from the SEA. The case study team included: evolve environment::architecture, CJL Engineering, the Center for Building Performance and Diagnostics as CMU, and Civil and Environmental Consultants. Click here to read the full report. 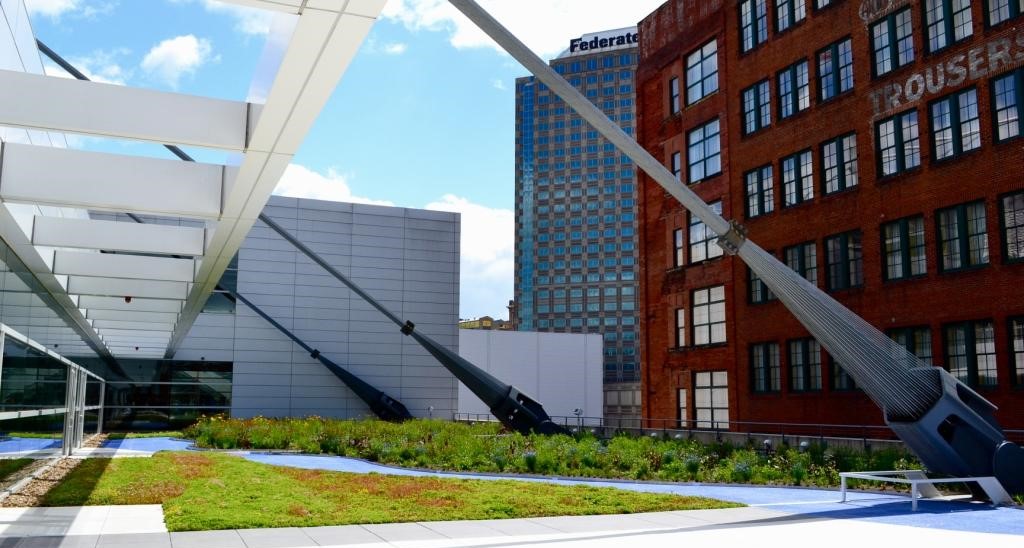 The South Terrace Green Roof, which opened in May 2012, operates as both a programmable, outdoor event space and an important component of the Convention Center's environmental initiatives. Click here to view the press release. When the 20,000 square foot roof was built, 73% of the former roof materials were recycled or donated, and 60% of purchased materials met sustainable requirements.

The South Terrace Green Roof is evidence of the Convention Center's commitment to environmentally-conscious practices. Green roofs store up to 80% of rainfall during a storm, lessening the burden on municipal drainage systems. In addition, it is estimated that the plants on the South Terrace Green Roof will remove 680 pounds of particulate matter pollution from the air each year—an amount equal to the annual air pollution generated by 255 cars.

The urban heat island effect (the disproportionate increase in summer temperatures in densely developed areas as a result of conventional asphalt and concrete materials heating in the sun) will be reduced due to its white pavers, which are made of a high-SRI (solar reflective index) material, and the plants themselves, through the natural evapotranspiration processes. Studies show that on the hottest of Pittsburgh days, a green roof remains fifty degrees cooler than a conventional roof.

The roof contains dozens of types of horticulture, including species native to Southwestern Pennsylvania, which help restore and protect natural habitat, and Sedum species, which are non-invasive, hardy, adaptive species used on many green roofs.

One of the most unique features about the green roof is that it is programmable, rentable space. If you would like to rent the space for your event, please contact Chad Ford at 412-325-6158 or cford@pittsburghcc.com.

Convention Center Hotel
The Authority continues to explore opportunities for the development of a convention center headquarter hotel.

The Convention Center includes a 710 space garage which is managed and operated by ALCO Parking Corporation. Entrances to the garage are located on 10th Street and 11th Street, marked by the green stars below. For current parking rates and leases for the garage, please visit the Convention Center Parking Garage.

There are several parking options within a fifteen minute walk to the Convention Center. Please click here for a map of the various parking garages and lots in the area. 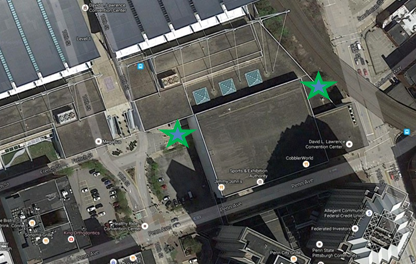